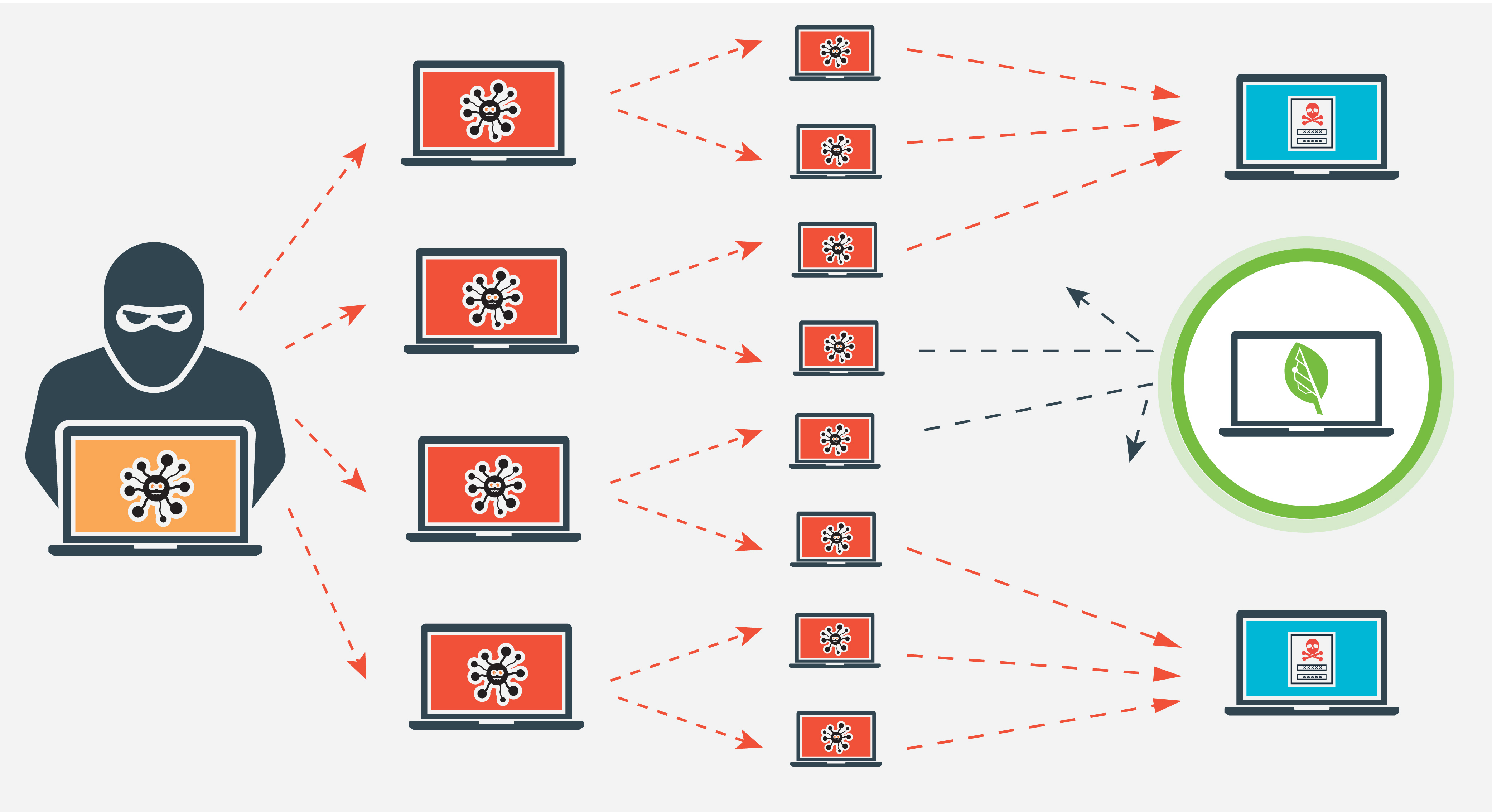 From targets like SMBs & large enterprises to influential European governments and more, distributed denial-of-service (DDoS) attacks are on the rise. Since 2020 the severity and scale of this category of cyberattacks have risen by an alarming 200%. Meaning that now, more than ever, you must implement an effective DDoS mitigation service to help protect you and keep your business online in case of a DDoS attack.

In this post, learn more about DDoS attacks, how deeply they impact SMBs, options for DDoS mitigation, and why Bigleaf Networks’ DDoS attack protection is the best choice for companies that want no compromises when it comes to reliable and performant connectivity.

What is a DDoS Attack and How Does It Work?

Think of it as a deliberate traffic jam with malicious intent.

However, a big difference between a DoS and a DDoS attack is the level of sophistication. The distributed part means they can originate from various sources & tend to cast a wider targeting net, so mitigation is more complex, and average SMBs don’t have the IT resources to combat DDoS attacks without help.

Unique from other cyberattacks, DDoS attacks don’t specifically penetrate your security measures. DDoS attacks exploit compromised machines and/or networks, cripple them, and render them unavailable to users (which leaves businesses vulnerable to threats that do). As we’ll learn, these attacks cost companies time, money, and much more.

DDoS attacks come in various forms, with the most prevalent falling into a couple of categories that describe their techniques and targets. Here’s the quick version:

Occasionally referred to as layer 3 or 4 DDoS attacks, these assault the pipelines connecting your network. They’re volumetric attacks that target your network infrastructure and bank on high volumes of data to slow your network performance. These attacks include TCP SYN Floods, UDP Floods, ICMP Floods, and Reflection Attacks.

Bigleaf Networks protects your business from these most common types of attacks.

Signs of a DDoS attack vary on type and severity. Clues of a potential attack can be unexplained traffic spikes, heavy traffic coming from a single IP address, or heavy traffic from users who all seem to share similar behavior.

Let’s take a closer look at DDoS attacks in the SMB landscape.

The Impact of DDoS Attacks on Businesses

The latest data from F5 states that DDoS attacks are up 200% from 2020. Comcast Business reports that 2021 was a record year for global DDoS attacks.

However, that’s not where it ends.

These stats are sobering. They should be a wake-up call illustrating how DDoS attacks can wreak havoc on unprepared SMBs.

DDoS attacks can create hard downtime and unusable uptime, where internet performance is so bad that you’re effectively offline. Both create a loss of revenue. According to Gartner, downtime or unusable internet costs SMBs over $300,000 per hour or $5,600 per minute for SMBs specifically.

Lost productivity is another damaging impact of DDoS attacks. Unusable uptime means employees cannot focus on doing their best work (or any work at all if they rely on VoIP services or other internet-based technologies) – costing employers even more.

Then there’s the cost of unplanned repair and recovery which varies across verticals and other factors. Throw more inevitable intangibles into the mix, like how DDoS attacks act as distractions or smokescreens for even more dangerous cyberattacks, and there’s no telling where the damage can lead. Imagine a healthcare organization that breaches HIPAA requirements because of lost data from the outage or stolen data from a cyberattack.

As all these big and small things add up, it’s clear that suffering any DDoS attack that causes downtime, even for just an hour, can leave a business in an unenviable position (unsalvageable depending on the size and resources). Business and IT leaders must deliberately plan for proper DDoS mitigation to avoid jeopardizing their daily operations or relationships with partners and customers.

There are a few different ways to protect yourself from DDoS attacks – some more effective than others.

You can go the DIY route. There are resources online with tips and tricks for DDoS mitigation, plus doing so gives you total control over how you develop and deploy your mitigation techniques.

However, that’s a double-edged sword — you’d need to rely on your internal resources to manually create a detection and mitigation solution for every scenario, monitor all incoming traffic to your site, and watch for potential attacks patterns. Then, once you detect an actual attack, you’ll need to identify the IP address sending the bogus traffic and block them with the help of your hosting provider, router, or firewall. Do you have the time and other resources to dedicate to this level of hands-on work? Most SMBs don’t.

If you have multiple ISPs, you’ll need separate plans and IP blocks for each circuit. This may work in theory but can lead to more issues as not every circuit is necessarily getting the same protection. Then, when you add up the upfront costs of a protected IP block, the high coverage costs for a protection plan, and overage fees for the mitigation of attacks that exceed plan coverage, the DPaaS route doesn’t look so simple anymore.

That leaves you with a fourth option. You can deploy one of the many third-party DDoS mitigations solutions currently on the market. This option is easier and requires less staffing than DIY and makes more sense than buying multiple protection plans from each ISP.

Protect Your Business from Disruptions and Downtime with Bigleaf DDoS Mitigation

What makes Bigleaf the best DDoS mitigation solution on the market?

Bigleaf DDoS Mitigation is a 24/7 service delivered through our owned-and-operated overlay Cloud Access Network, protecting all your traffic running through our service, on every ISP connection you’re using, under one service contract.

How Does It Work?

Good and bad traffic attempt to travel to your location via the Bigleaf Cloud Access Network > That traffic goes through the DDoS Scrubbing platform, where it’s identified and either filtered out or allowed through > Only good traffic makes it through to your location. During attacks, malicious traffic is filtered out by the Bigleaf DDoS Mitigation service at the scrubber, keeping it off your local circuits.

We’re circuit agnostic, meaning you’re covered regardless of ISP, and all your traffic running through our service is protected. Unlike purchasing some DDoS mitigation solutions via your ISP, ours has no limits on size, duration, frequency, or types of DDoS attacks.

When an attack occurs, there’s no manual intervention needed. Bigleaf quickly detects and alleviates disruptions from common DDoS attacks in real-time and automatically identifies attack types and filters traffic until the threat subsides.

All services are managed under the Bigleaf Cloud Access Network. Bigleaf issues protected IP blocks as part of your Bigleaf DDoS service, so you don’t have to acquire IP blocks separately, which allows us to provide consistency in coverage across your circuits.

On top of that, it’s easy to deploy.

To sum it up, Bigleaf DDoS mitigation is for you if you:

Being the victim of a DDoS attack is no fun and can cost your business much more than you may have imagined. Thankfully, there are solutions you can implement to mitigate them to keep your business internet technologies running silky smooth.

Bigleaf empowers worry-free business productivity that keeps your employees and leadership happy. With Bigleaf’s proven SD-WAN architecture, innovative AI, and intelligent DDoS mitigation you can keep your business operating smoothly for every user, on every app, over any ISP — even during malicious assaults on your network.

Learn more about how Bigleaf helps defend your business from attacks by requesting a FREE demo or get in touch at sales@bigleaf.net.